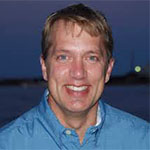 Kris Grudt  is one of those capable individuals who knows how to coalesce people’s natural enthusiasms and transform them into an efficient, innovatively expanding organization.  As Executive Director of the Princeton National Rowing Association in New Jersey, Kris oversees the Mercer Lake center which hosts the National Championships, Collegiate Championships, and Olympic team competitions.  On any early morning as the mist rises off the lake you might spy boats from Peddie, Hun, Lawrenceville schools, as well as a huge club and training program for oarsmen and oarswomen of all ages.

You might even see a shell lumbering laden with struggling corporate execs, all desperately striving to coordinate and move in a single direction – a brainstorm of Kris and the NPRA staff in which business folks learn the truly vital value of teamwork.  As Kris puts it, “It’s amazing to see the way a group of hedge fund brokers vs. a crew of research scientists all try to work as one.”

But perhaps the greatest teamwork lesson comes from the modest Grudt himself who has been able to harness all the rowing interest, athletics, and donor sources.   His leadership has grown them into a club which the National Rowing Association has just awarded the honor of Best Rowing Club in 2015, making them valedictorian of America’s over 1200 rowing clubs.

To learn more about Kris and the NPRA, visit www.rowpnra.org.