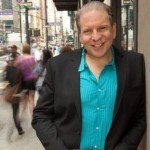 Eddie Brill has comedy in his blood. While most college men were chasing women and drinking beer, Eddie Brill as chasing women, drinking beer, and founding the Emerson Comedy Club with classmate Norman Lear. Launching into standup in the early 1980s, he doubled ‘em over the Big Apple, winning three MAC Awards as the Outstanding Comic in NYC. Having that rare comedic ability to take his humor into other cultures, Eddie has taped over 100 shows from Hong Kong, to Holland, to Hoboken.

For 17 years, Eddie was the warmup comic for the David Letterman’s Late Show, and for more than a decade served as the shows talent coordinator. Whether he’s playing “Dr. Katz Professional Therapist,” making a Mocumentary for comedy central, or simply being his own wry self on a nightclub stage, Eddie Brill has the personality to keep them always laughing. Currently, Eddie is penning a book manuscript that reveals a series of intriguing tales about fellow show biz greats with whom he’s shared the warm spotlight, and a few cold beers. You can also read his wit in the forward to In the Words of My Wife’s Husband.
To learn more about Eddie Brill, visit www.eddiebrill.com.